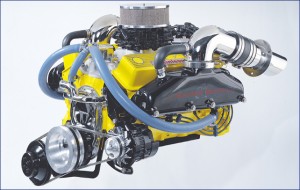 In the world of high-performance powerboats, holding the hot-hand in a poker run means getting there quickly but also in high style. The inside of the engine compartment is not only the place where the business of power is conducted, but it’s a showplace of shine, where harnessing brute force and hawking beauty go hand-in-hand. Stainless Marine of Opa Locka, Florida, has spent nearly 33 years in the world of brilliance and speed.

Stainless Marine’s factory has been in the same South Florida building for 33 years, but inside, it’s been keeping up with changing times in the world of speed and manufacturing. Founder Jerry Schmid started out in a single work bay during spare time after his job at Eastern Airlines to make a small line of stainless steel products. “It was pretty rough; I worked the night shift from eleven to seven, seven days a week,” says Schmid. “When I started this business, I would come here and work, sleep a little and go back to my shift at Eastern. That was my life for a few years.”

As demand for his products grew, Schmid spread out into more areas of the building and eventually quit his machinist job at Eastern to devote all of his time to Stainless. Expanding work bay by work bay, he eventually took over the entire 42,000 square-foot building. “I took in tool and die work for local businesses. The first product was an all stainless steel exhaust manifold,” Schmid says. “Back then we were called Custom Manufacturing, then Custom Manufacturing and Marine Products. Then, when we started specializing in everything stainless, we became Stainless Marine. The funny thing is, now over half of what we make is aluminum, but we kept our well-known name.”

Stainless Marine is now recognized worldwide for its high-torque aluminum manifolds, outboard engine brackets, crossovers, thermostat housings, risers, jackplates, and “No-Slack” indicators. As performance has evolved, so has Stainless Marine. With the introduction of aluminum and space age plastics, handwork has given way to computer controlled machining.

The factory has a million dollar-plus investment in high tech tools, including a large fabricating area to handle big projects. An engineering office complete with CAD-CAM computer systems turns out prototype and short run special parts in minimal time. Computer-controlled machining turning centers and electronic eye controlled plasma-cutting machines process more than a half-million pounds of aluminum and stainless steel products to exact standards each year. But in true Stainless tradition, much of the welding is still done by hand, by experts, and backed by a five-year warranty.

Stainless Marine’s No-Slack trim tab, tunnel flap and drive indicators are found on many of today’s hottest performance boats. “One of my employees, Allan Brown, is very good at developing. He gets the ideas and gets them going. The No-Slack indicator was his idea. We’ve just refined it over time,” Schmid said. By utilizing a triple-wound constant-force stainless steel spring to keep the inner cable under 4.3 pounds of tension, the No-Slack system uses a pull-pull operation instead of a push-pull operation. Stainless says its indicators have an inherent accuracy of a few thousandths of an inch, whereas push-pull indicators have an inherent quarter-inch of slack. The indicator cable used exclusively by Stainless Marine is flexible enough to make a one-inch radius turn. No-Slack trim indicator bezels are available in all popular colors including carbon fiber and its heads-up indicators, used by some of the fastest boats in the world, are also available in clear so as not to obstruct the view of the water ahead.

Brown has played a key role in Stainless Marine’s success for more than 10 years, joining Schmid in his business after leaving the racing circuit when Tom Gentry died after a race in Key West. Known as “Brownie” to everyone on the circuit, he was Gentry’s chief engineer. He’s brought his great personality and a wealth of knowledge to Schmid’s business. Schmid says, “He’s been a blessing. I don’t know what I’d do without him. He’s not only an employee; he’s a dear friend. He’s a very brilliant man with great knowledge and a brilliant mind. He’s great people.”

Among Stainless Marine’s offerings is a unique DC underwater light with a plastic housing, which has been approved by the ABS and ABYC for below-water applications. The housing features four separate underwater stops, a flat glass lens that can be coated with a clear anti-foulant and 12 volt LEDs good for 100,000 hours of use. “We’re making high intensity lights, all of ours are LED with basic 12-volt current.” Schmid says, “Knowing materials, I think titanium is the only material impervious to the marine environment and we are just a few weeks away from having our first titanium underwater LEDs available.” To see Jerry explain how these new underwater lights work, see his video on our Web site, marinebusinessjournal.com. 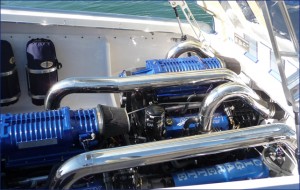 Always with performance at the top of the agenda, Stainless Marine also offers a complete line of accessories for outboards. Designed for today’s heavier, wider outboards up to 350 horsepower, many OEM builders including Concept, Oceanmaster, Proline, and Angler use its transom brackets, which provide better top-end speed with the same power, quicker back-down ability and added space in the cockpit. The watertight bracket adds additional flotation–685 pounds in the twin bracket and 315 pounds in the single bracket–that can allow the boat to float higher with the same engine package.

Keeping a good poker face at the dock is part of racing, but today’s go-fast boats are just as shiny inside as out and Stainless Marine provides gleaming exhaust manifold systems in its Big Block Hi-Torque and Big Block Hi-Torque III applications. The Gen-3 line is specifically designed for 600 to 1,400 horsepower engines with many systems exceeding header performance. The company raceboat Extreme Stainless Marine Special won 13 national races in a row on its way to the 2000 World and National Title.

Nearly every part manufactured by Stainless Marine has its name and phone number on it. It’s there for a reason: If you have a problem or question, Stainless Marine technical staff members are there to answer it. It’s that kind of personal attention combined with proven performance that keep Stainless Marine at the front of the pack. But Schmid knows that these coming months are going to present some of the biggest economic challenges to his business and the entire marine industry, “It’s going to be rough. We’ve been around for 30 years. I’ve had to cut back hours and employees, but we’ll make it. A lot of others won’t.”